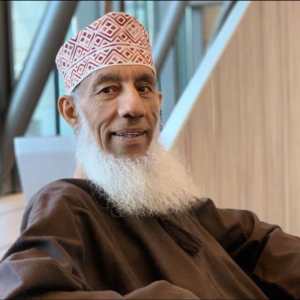 Normally at around 10 pm each night, I simply switch off my phone from Sound to Just Silence as I usually get disturbed a lot by phone calls from my Books Publishers in USA and Amazon – as for them it is still working hours! Sometimes the calls come from Singapore and UK also more!

It is very disturbing when the phone rings and you have an Oxygen Mask on to get your sleep! I was about to do that again for this night when several WhatsApp messages started to come in my mobile phone saying that my very good friend and brother Sheikh Seif Salim Issa Al Harrasi had passed away whilst undergoing Medical Treatment in UK.

It was last September 2018 when I had met Marehem Sheikh Seif Al Harrasi at Muscat International Airport as we were in the same flight to go to Zanzibar! He was very much perturbed, concerned and disturbed to see me in a wheel chair – as being handled for my flight trip – as I could not climb the steps of the plane in boarding! What happened to you Dear Sheikh Majid – he lamented!

So we got talking about the good days in PDO and as I was explaining to him about my holidays trip to Zanzibar with Madam Wife! He asked me which hotel I had booked into because as usual hospitable kind person that he always was – he wanted to invite me for a few days stay in his villa in Bweni I think!

I remarked to him that he looked sort of worried and sickly – and he calmly told me we shall talk afterwards my good friend! It was only later in the plane we were in Business Class and he was in Economy that I dared to joke with him ‘to spend some more money to enjoy’ joke! He handled the slur very well with his great sense of mirth fun and joke saying why should he and ‘you do need the bigger seat’ in Business Class – whilst I do not!

Another person who does not have his traits and senses of humour could have put me in my place – but he was an exceptional human being first class high profile person the world is proud to have in a human being! One time he called me and I was not sure who he was and he was suggesting to me a business contact when my Management Consultancy MMDC was operating! Yes that is another trait of his to assist and help other unasked unassisted! So he repeated a nickname that would have identified him – joking – Guess that will make you happier – and remember who I was!

I asked for his apology but he just pushed the subject away – what is a joke and tease amongst brothers and friends! I noticed him only once when I was in HR when an Expatriate was misbehaving in his Department – and even here he was more remedial corrective rather than accusing and abusing!

A few days in Zanzibar, he had sent me a WhatsApp message saying he was returning to Oman because he was very sick! He wished me well and to enjoy my holidays and try to be careful on certain issues and things that many visiting the islands are not aware of – and we become naïve and trusting and we think we know everything and do not need to be told or to be reminded of!

In Zanzibar he had built a nice beautiful villa at the coastline – and he had appeared in The Oman Ramadhan Television Programmes a few years ago – where he featured centrally and immensely – explaining the beautiful historical relationships between Oman and Zanzibar!

I am sure that there are many also in Zanzibar who will be crying a lot today on hearing his death – his deep ties and commitment to help and assist those lesser advantaged – especially by his kindness and generosity to the local populace! Especially in Religious Affairs and in The Holy Month of Fasting of Ramadhan! Pray that his kin will continue with his good works In Shaa Allah Yaa Rabbi!

A Great Man Has Come – And Now He Is Gone! But we will always remember and pray for you – Our Very Good Friend and Brother!

May Allah SWT Remove The Punishment of The Grave for you – May Allah SWT Open The Highest Heavens of Firdaus For You – May you rest in eternal peace in this world and the next Ameen! May Allah Give Sabrah Patience and Imaan to your Family Ameen!

Till we meet again In Shaa Allah – Goodbye My Brother and Best Friend!